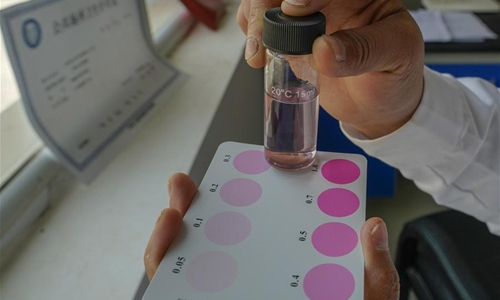 An analyst checks water quality at a water plant in Moyu County, northwest China’s Xinjiang Uygur Autonomous Region, on Nov. 21, 2019. As of Nov. 1, all the registered low-income residents in Moyu have access to fresh tap water, according to local authorities. In 2019, Moyu County has invested over 260 million yuan (about 36.9 million U.S. dollars) to build and improve relevant infrastructure, providing safe drinking water to 57,313 low-income residents in 12,824 households. (Xinhua/Zhao Ge)

More than 20 villagers from Xiantao, Central China’s Hubei Province, suffered from vomiting and diarrhea after being poisoned after drinking tap water. All of them have recovered except for two, who have been hospitalized for further treatment, media reported on Sunday.

The poisoning is suspected to have been caused by a chemical leak from a local firm, resulting in an overrun of barium metal in water pipes. Further investigations are underway, the Chongqing Morning News reported.

The personnel responsible have been detained by the police, and will be dealt with once the investigation results are released, according to the newspaper.

The patients started to experience abnormal symptoms on the evening of October 1, villagers said. Shortly after supper, they suffered from vomiting and diarrhea, with some severe cases feeling fatigue or even falling into a coma.

One villager surnamed Xu has been unconscious for nine days and put on ventilators at an ICU. He fell into a coma after “drinking a large bowl of soup during supper,” his son told the newspaper.

Doctors at a local hospital who diagnosed Xu said that he had lower than normal levels of potassium in the blood serum due to food poisoning, which caused acute respiratory failure.

Shortly after the incident, local authorities initiated emergency plans, including cutting off all water sources into the village, and emergency treatment of patients. The water source was replaced overnight, while close attention was paid to the water quality with real-time monitoring.

An investigation team said that the incident was caused by an overrun of barium metal in water pipes, which was leaked from a local chemical plant.

Meanwhile, the local health commission and public security authorities declined to disclose more information when reached by the Global Times on Sunday.

The company involved had been punished in the past for polluting water sources back in August 2018, police records show. It was fined 200,000 yuan ($30,000) for that incident.

Read more:: Dozens of villagers in Central China poisoned from tap water suspected to be con…

Abigail Mercer   | The Daytona Beach News-Journal In the race to represent the Volusia Soil and Water Conservation District,...

Plan for world-class waterfowl destination in Jackson County to be updated By Contributor | on October 18, 2020 The...

LAS VEGAS (KLAS) — A fake message on social media — and also spreading through text messages — is...

HANNIBAL (WGEM) -- Tri-State students got a look at how their actions impact water treatment costs for communities along...

While the use of cover crops in local agricultural production is not new, recent interest is likely due to...

Agreement to Build Waste to Energy Plants in Mexico

The Minimalist’s Guide to a Perfect Cup of Coffee