Kouga Dam in Patensie is the largest one serving the Nelson Mandela Bay area. Without significant rainfall, swifter and more effective leak repairs, and reduced consumption, it will run dry in July.

Many residents of Nelson Mandela Bay Municipality argue a long-term failure to fix the leaks that affect townships and informal settlements had contributed to the predicted “Dry July”, when all four of the major dams supplying water to the city might run out of usable water, according to GroundUp.

Many residents of Nelson Mandela Bay Municipality blame the muniicpality for their water woes.

They argued a long-term failure to fix the leaks that affect townships and informal settlements had contributed to the predicted “Dry July”, when all four of the major dams supplying water to the city might run out of usable water, according to GroundUp.On 28 April, Mayor Nqaba Bhanga described the municipality’s latest drought intervention plan.

Bhanga told journalists he was happy with the way the municipality was dealing with leaks, which had been identified as the most important intervention.

“We are acutely aware of the poor state of our bulk water infrastructure.”

He boasted the loss of water from leaks had dropped from 39% in June to 29% in February. (Cape Town’s water leak loss had been reduced to about 15% during its Day Zero crisis.)

“The municipality is identifying aging infrastructure that needs to be replaced, but this will take time,” said the mayor.

“Water levels at the Impofu Dam are already below that which can be extracted, so the municipality has deployed pump barges to access this dead storage capacity,” said Bhanga.

At 30 April, the combined available supply of the five dams that provide the municipality had fallen to below 13%. If no rains fall, the municipality’s largest dam, Kouga, will run dry by July, with the others following shortly after.

Should the dams run dry, the municipality will have to rely on the Nooitgedacht system.

It is currently working on rerouting this system to supply the western regions of the metro, as well as converting the Grassridge Reservoir into a temporary water treatment facility and digging boreholes. 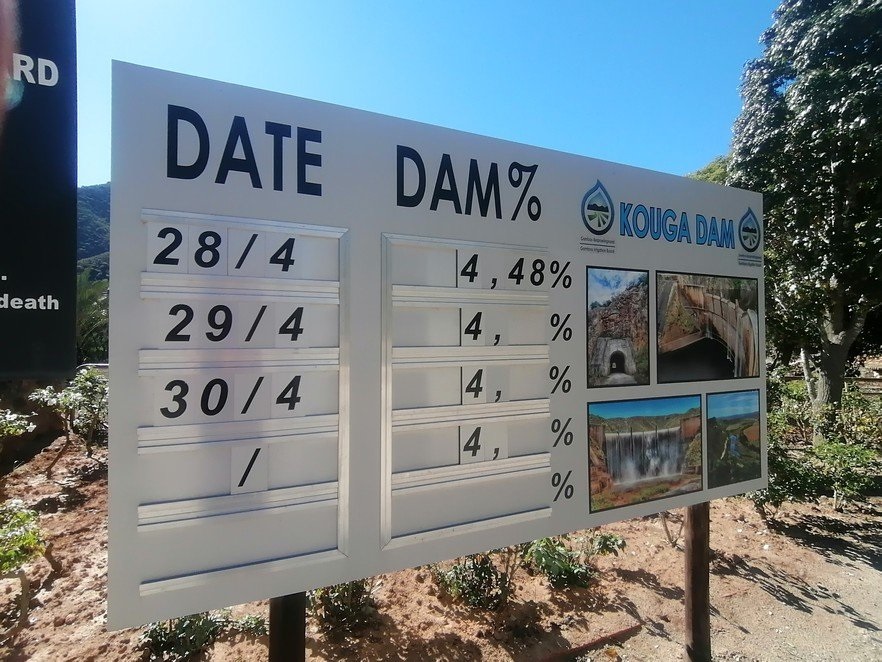 GroundUp took a similar photo in September. Then the Kouga Dam level was over 8%. The combined levels of the four large dams has dropped from 19% to 13% since then.

The western regions of the Eastern Cape are suffering a six-year drought.

Once again the Klamath River Basin is in a "water crisis." With not enough water to fulfill all needs...

All of California Now in Drought; Disastrous Wildfires & Water Crisis Could Lie …

All of California Now in Drought; Disastrous Wildfires & Water Crisis Could Lie Ahead Duration: 01:06 2 days ago...

Just about every indicator of drought is flashing red across the western U.S. after a dry winter and warm...

Bhopal: Water crisis in Bairagarh and other densely populated areas in Bhopal may prompt residents to defy corona curfew...

Water safe to drink despite problems